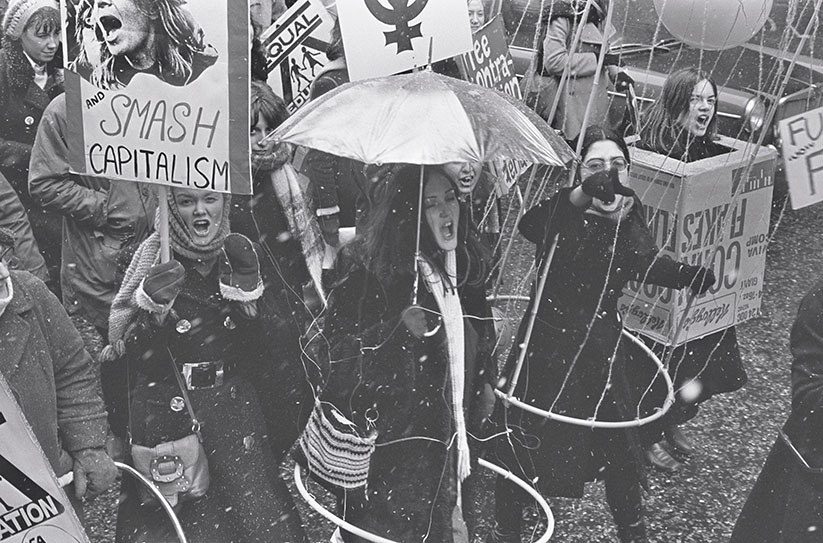 The following exhibition review is written by Imogen Holt, a sixth-form student at The Henry Box School in Witney, Oxfordshire.

The exhibition 'Images of Liberation' is part of Photo Oxford, and showcases the work of activist photographer Sally Fraser.

As part of the Photo Oxford Festival, I visited the ‘Images of Liberation’ exhibition, a collection of unique photographs by Sally Fraser. The exhibition was held at what was previously known as ‘Ruskin College’ and the location felt significant because it was the site of the first Women’s Liberation Conference in Britain (1970). Hosted by Cohen Quad, the public can go and see some inspiring images taken at a time when second-wave feminism was prevalent in 1970s Britain and this opportunity is available throughout November 2021.

One photograph that was particularly emotive showed the women’s liberation march of 1971, where thousands of people marched from Hyde Park to Trafalgar Square, in protest of obvious disparities in gender equality. It was informative to see that it was not just women who were present at the protests and men and women stood side by side, all fighting for the same cause. The images showed a united front that is not always depicted in other sources. There were numerous other images and contextual writing was provided alongside the images. In this way, it was possible to understand exactly what the images were depicting, and it provided a space for reflection on events that happened only fifty years ago.

I was able to learn that, under the umbrella of women’s liberation, there were four main aims outlined at the meetings: equal job and educational opportunities; free contraception and abortion; equal pay and free twenty-four-hour nurseries. It was enlightening to see what life was like for women no more than two generations ago and it was interesting to reflect on the extent to which society has since changed. Even though the images were all in black and white, the people in them looked just like people do today. This observation reminded me that this movement is very much part of Britain’s modern history.

I would recommend this exhibition to anybody who is interested in Britain’s history, and especially to those who enjoy learning about social and political change. These images are a great source, and they are of clear quality, taken by a woman who was present at the events. They seem to be taken from a perspective of observation instead of being driven by a view of a particular stance. What is most striking is to see that people were peacefully campaigning for change, trying to create what they believed would be an improved world. The exhibition is powerful because it relies on its visitors to forge their own opinions on the events depicted in the photographs, not necessarily forcing the onlooker in one direction or another.