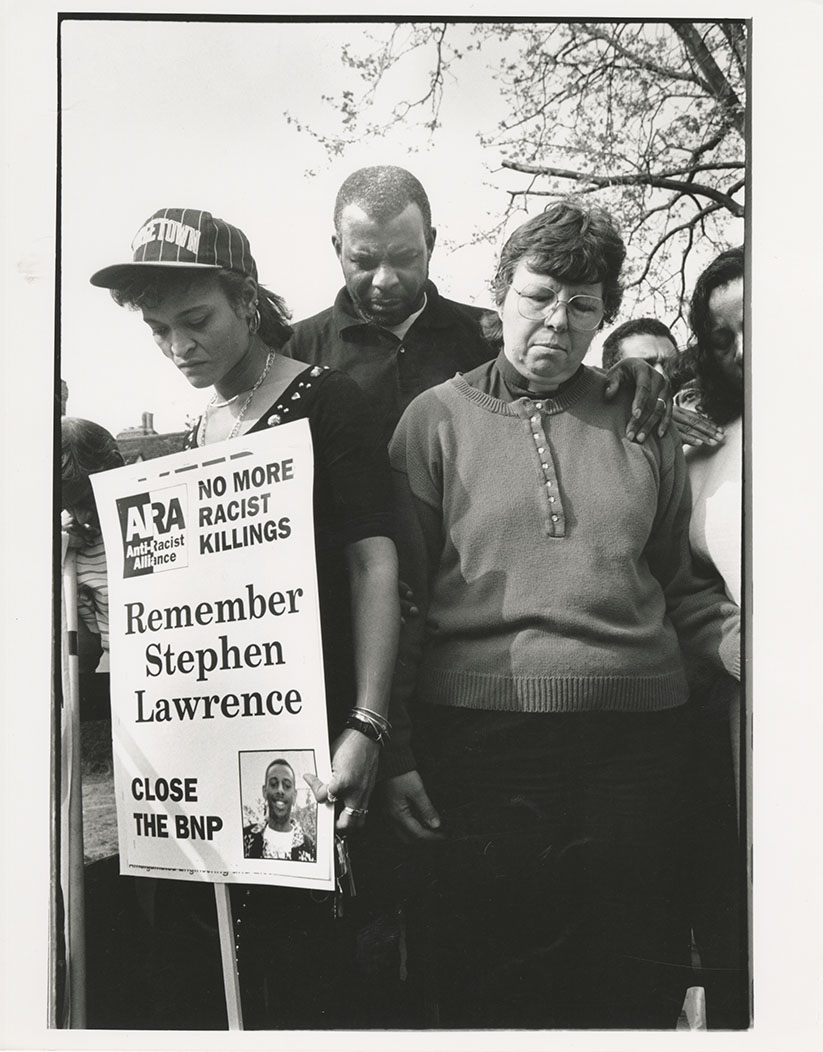 In their own words:

I was inspired to record my piece in response to my 1993 monochrome image of Stephen Lawrence's family and friends standing at the bus stop on Well Hall Road being exhibited in the Four Corners gallery without my consent. I gave consent to the image being shown in the exhibition after conversations with Four Corners and discussing the issues raised.

This led me to wanting to turn a negative into a positive producing an audio piece as a response. I reached out to two Black women creatives, Katie Numi Usher and Fatuma Khaireh to see how we could celebrate and rejoice in  the activism of Doreen Lawrence, Cecile Nobriega's Bronze Woman statue, the everyday activism of our mothers and ourselves.

Going from Ladyville, Belize to London, United Kingdom was a far greater emotional upheaval than I had realised.

It is from London, that Belize was governed as a colony, at first and even after, as a dependency of Jamaica. That period was 349 years until Belize finally was able to successfully negotiate its political independence on September 21st, 1981. Mind you, Belize is not only a member of the Commonwealth (which was initially only open to perceived-white nations, and only opened after when the United Kingdom felt a shrink of its expansive Empire, with several African and Caribbean nations attaining independence in the 1950s and 1960s) but also a part of the Realm of Nations. The Queen of England is still our Head of State, and she is represented in Belize by a Governor General. Belize is not a decolonised place, although independent, it remains a misogynoir state, with all the other colonial trappings intact. Belize has no public monuments to Black women for above-mentioned obvious reasons. So seeing the Bronze Woman, inspired by Cecile Nobrega's poem, in Stockwell was extremely impactful to me. I had come to colonial headquarters, the literal Colonial Office (London in all correspondence during Belize's colonial period) and witnessed something which shook we to my core because I'd never seen it at home. Seeing Henry Tate's bust in Windrush Square just a stone's throw from the Black Cultural Archive was incomprehensible to me, until I researched his connection to Lambeth. The Caribbean plantations that his business and his country have properly exploited had its descendants resist it all right there.

It is still giving me pause.

I continue to think about all these things. This invitation to join this audio for Stephen Lawrence Day, may the spirit of our young brother forever rest in peace, even though his life was shook out from him in such a violent way, as we continue to think about how our sons, daughters, mothers and fathers are still being persecuted by white supremacy was one i simply could not afford not to accept.

We're marking the day with a reflective audio piece available below, a collaboration between photographer Carole Wright and Katie Numi Usher and produced by Fatuma Khaireh. The piece emerges from discussions around consent, power and permission-giving, and takes us on a journey through the London streets and monuments resonant to Stephen's story as well as broader anti-racist activist histories, including Cecile Nobrega's Bronze Woman statue, and to sites of resistance and liberation in Belize, where Katie Numi Usher is based.

This process has encouraged us to look at our processes around consent and image-use. Carole Wright's image was initially selected for our current exhibition Photographing Protest from the Format Photographic Agency archives at the Bishopsgate Institute, without her knowledge. Although we aim to contact all photographers whose work we are interested in exhibiting, we faced difficulties in reaching out to Carole, but felt strongly about the importance of this vital work. In hindsight, we should have done better. Carole learned of the image's inclusion before the show opened through a friend, and has helpfully participated in a productive dialogue with us, for which we are grateful. We understand the issues raised are especially important for Black Creatives and particularly Black women. Carole agreed that the image should remain in the show. We have supported Carole in making this audio piece together with Katie Numi Usher, as a response to this experience, and to celebrate her image in the context of Stephen Lawrence Day.

Short excerpts from the piece:

In 2020 Carole initiated the three day festival and collective ‘Blak Outside’  as a form of resistance with residents on Peabody Blackfriars estate, London in response to heavy policing during the first Covid lockdown.

The Blak Outside is grassroots led, intergenerational, supportive of social housing residents, QTIBIPOC (queer, trans, intersex, Black, indigenous people of colour).It builds on existing work, particularly the thirty two years of community work of Carole  to provide a long term legacy within the communities where she lives and works.  Blak Outside was selected for the inaugural  Support Structures for Support Structures, a fellowship programme initiated by the Serpentine Galleries, that supports up to ten artists and collectives working at the intersection of art, spatial politics and community practice.

After studying the sciences in high school and various subjects in sixth form I decided to change my studies to art. I went to Mérida, Yucatán, México and studied at the Escuela Superior de Artes de Yucatán.

I left 3 semesters shy of my licenciatura and  returned to Belize, where I've been exploring the cultural scene and questioning the status quo with art. I use social media networks as virtual galleries (i.e. facebook, instagram, tumblr and twitter).

I created a selfie album on facebook called el Fleco this later inspired the e-Book written by Belizean artist Yasser Musa (March 4, 2011) of the same name, which explored the artist's life as the work.

From 2014 to 2017, I was part of the editorial team, the culture e-magazine BAFFU, an electronic magazine which offered a scan of the Belizean contemporary visual art and literature. I  contributed poetry, art commentary, and visual art to thirteen issues. I organized the LAB, which was a collaborative effort with the Image Factory Art Foundation, an experimental space for creators to present work/proposals in a rapid fire style.

Fatuma Khaireh is a Creative Producer working in Audio. She is interested in stories from the black diaspora