The unprecedented protests triggered a turning point in UK race relations, and represent a moment of both local and national resistance against discrimination.

As there will be no physical gathering to commemorate Altab Ali Day this year, we will be joining many others marking this important moment with the launch of a new animated film, Battle of Brick Lane, which premieres online on Monday.

Made in partnership with Tower Hamlets Council and Loughborough University’s Migrant Memories and the Post-colonial Imagination project, the moving animation was led by young people who were inspired to tell Altab Ali’s story.

To watch the premiere of the film visit memoriesofpartition.co.uk from 10am Monday 4 May.

Find out more about our Brick Lane 1978 project here. 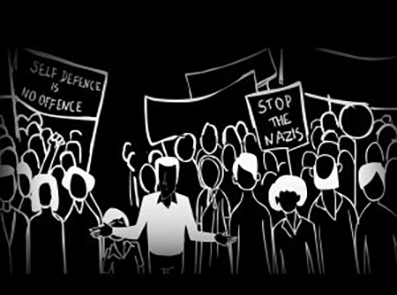