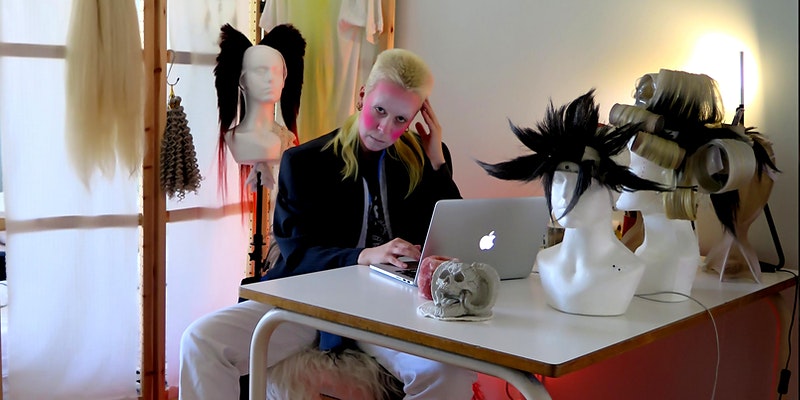 Sissel Karneskog is a non-binary human wear artist and graduate from London Royal College of Art, with  a masters degree in fashion design. Sissel’s process involves the ones who are behind the scenes, on the  mood-boards, the ”creatures” that inspire the mainstream. Since their practice most often has an  auto-ethnographic core, Sissel displays topics and discussions that might come across as complicated,  jarring, forceful and are often misunderstood. This is to show that the human emotional body is evolving  at a higher pace compared to the rest of society that is still rooted in the binary. The world exists as a  family built from strange pieces, Sissel’s work is a visual argument that explains the meeting of what we  choose to speak in connection to what we witness. There is a time to learn but more importantly now to  un-learn.

As part of the Dream. Snap. Freedom online exhibition, we caught up with Sissel to find out more on their views of activism and radical play.

I was born and raised in Sweden, started up in the north, and then moved to the capital Stockholm in  my early 20’s. After some years of figuring out myself and finding my community, my safe space, I’ve started my journey in how and what I could, and would create. How we dress and express is more than what you see with the naked eye. These are the most intimate objects we own, it acts as a timestamp and also carries a long history of social constructions and controversy. So.. I started my BA in fashion  design at Beckmans College of Design in Stockholm, and after that in 2018 I came to London to enter my MA at Royal College of Art. This was when I started to understand how me and my work are intertwined.  Before this I rarely used my own physical body within my work, my creations acted more as a visual  extension of my emotional body. But including myself, by acting, interacting and disrupting the idea  of costume, through film and photography, in the simplest way to create context... also disrupt the way  you view gender and sexuality. With this I want to show my truth, how my emotional body has gone through a journey, an exploration of finding my truest version of myself. And also to explain how I often resent my physical body that you would call she or her, and how I resent it because you still do.

I am just one voice of my community. I speak for them, fight with them. By being a non-binary queer  identity there is still so much work that needs to be done in order to exist in a world of respect, inclusion  and acceptance, a world that is equal. I don’t define my gender identity nor my sexuality and I don’t  define my practice in one singular description. Design interacts with the human, and in the same way I  interact with design. My work always revolves around the human physical body, emotional body and  how those challenge the body of society. My practice is a constant exploration of how we express, and  how it is received. It operates as a constant experiment of human interaction to understand and explain  how we exist in a world that is still rooted in the binary, and how this is a great flaw. The concept of  perversion being the opposite of the normal.

I decided to show the most extreme customized version of myself, which is wearing the costume from  my past. This past life was me playing an act, me trying to play the role that was expected of me, and  was constructed for me. By bringing my past to the present did not only challenge you, it was even more  a challenge for myself. By displaying this past life, not only putting myself in a state were I am in agony

with what you witness, but more so the interaction that display receives. But with doing this, it became  the foundation, and shaped everything that i am presenting to you today.

During this time, I have acted as a subject and an object trough an exploration of customization with the  visible of one non-binary body, to further explore the interaction and the responses that body will  receive. This is a visual argument that explains that there is a lot to learn, but so much more to unlearn.  By expressing the human physical body, emotional body and how those challenge the body of society,  not only exploring a constructed narrative but more so speaking a truth. I am not only me, I am Them.

By placing myself in the practice I have, it is supposed to be witnessed and critiqued by others. And then  by being who I am and what I am, and presenting that to the world in an intimate private way, is  intimidating. Because it is not only the work, but also myself that is being displayed. The reactions were  overwhelming. I believe that the public is ready and longing to evolve the social debate regarding the  subjects that are the foundation of my work. Because we now see that we need to do better.

Our vision is the sense that we tend to trust, for those who have the privilege to use it. But it is also that  exact trust that has been misguided through time. And it is up for each creator to explore and decide  what their role is, but that role can be of greatness. Through any form of image you can have the  possibility to make the most mundane to act, as the receiver can react.

What do you think of as 'Radical Play'?

Well... that depends on how you would contextualize that concept... I do feel that those words together  are rather self-explanatory. Within this context, it opens up and explores the idea of activism. That word  is one that carries a heavy weight of stigma, but it can be as simple as breathing, as silent as a whisper  and as soft as a stroke on the cheek. But also, the easiest way to invite someone is through joy, as  humans we want to feed ourselves with energies that make us feel pleasure. And with that knowledge  we are here to push the boundaries of what that could be. Our world has evolved what interaction  means, and even though we are longing for human touch, it has given us the ability to push us into a  new reality. Where our emotional body can have the ability to explore further, create a network and a  stronger community. We need to keep having the social debate and discussion about how this needs to  be equal, included, diverse and accepted. How action makes for change.